It’s Friday! My lovely Egremont Bookclub gals will be meeting later. Boo. But I am creating another bookclub in Yokohama. Woot.

Yesterday we returned school  paperwork to the Naka Ward Office. It’s great. There’s a bit of waiting around, but the job is done there and then. Really efficient. Copeland could learn a lot. But then they’d need to employ more staff and there is no money……*sighs*. You get a number and two corresponding slips of paper and are eventually called to the desk. One slip of paper goes off into the office with the paperwork to be sorted and you keep the other to be reunited at the end of the job. So good. We then went to a Family mart and bought some picnic items including for me and George inarizushi, which is a pocket of tofu with sweetened rice inside. Oliver went for sausage and chips!

We ate these in a charming park near the Baystars’ stadium (the local baseball team). There were loads of tulips, they were so beautiful and dotted around the place were lots of artists practising their watercolours. 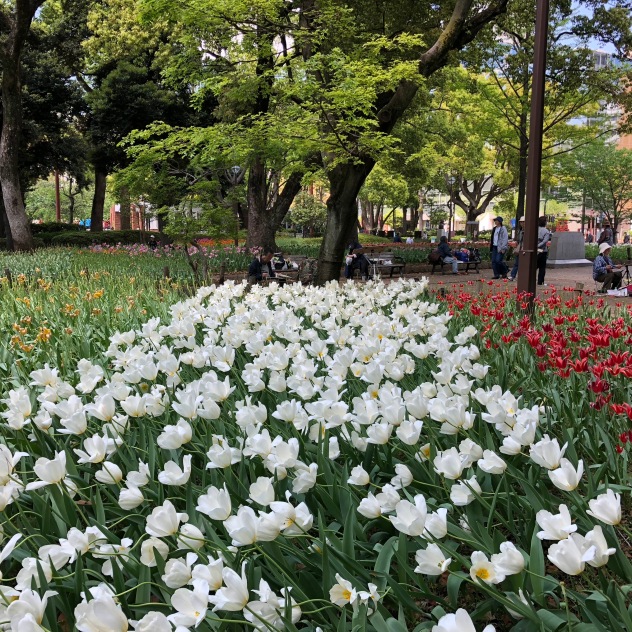 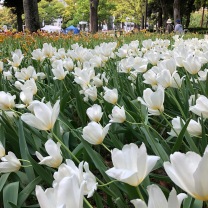 After this we learned about useful buses and bus stops and the limits of Google maps. But after a prolonged wait at the wrong bus-stop we found the right bus and headed to the Aeon department store to attempt the school shop.

I’ve been worrying about this for months. The list of items seemed scary and odd, but what Motomachi Primary school are asking for isn’t as huge as other lists I’ve seen and thankfully most of it was all on one floor. Unfortunately I ran out of cash before I finished the first shop. So we caught the bus home, had a wee rest, picked up more spondulics and headed back for another shot. Yesterday I bought:

Of course I am now taking their temperatures and it is interesting to see how much it fluctuates.

And on that note: I need to head out now to meet Dan’s colleagues for lunch. [Dan might be too busy to meet us(!)], then we are meeting a friend called Frances, from Taiwan, who is married to another of Dan’s colleagues; and tomorrow I am super excited to be meeting up with an old pal from Bournemouth. Yes!! So exciting. Very out of the blue. Cannot wait!!

One thought on “The weekend – shuumatsu 週末”

This site uses Akismet to reduce spam. Learn how your comment data is processed.