We had a rather hectic fortnight in the UK at the end of August visiting friends and relatives and getting George to and from his Razzamatazz summer school. Sadly the UK’s heatwave had waved away so it was the usual grey chilly summer weather that I expect of Cumbria.

Right now I am shirking from the job of hanging out the washing on our balcony. I’ve just updated my LinkedIn profile. (Why?!) And am waiting for some actually caffeinated coffee to brew. (Again, why? I’ve been off caffeine for months now.) It’s a crazy morning.

Today is Disaster Training Day. Dan has it at work and the boys are doing it at school too. I have to go and pick them up at 11.20 as if there’s been a massive earthquake. (Remember to take slippers and PTA ID badge, though).

The boys have been back at school for one week and only mornings at that. I think it’s been a really good reintroduction to school life. That plus the AWESOME school party that was held last Saturday. We didn’t know what to expect, and Dan was wanting us to go to see the last of the summer fireworks at Hakkeijima Sea Paradise, where there would be large crowds of Japanese in their finery. But we were knackered from the jet lag and the boys had been griping about being back in Japan and having to go to school so I didn’t want a late night.

Anyway, we went and it was ace. There were food stalls and lucky dip type stalls and dancing, drumming and singing, and folks in their finery too. And there was a beer tent. Everyone was happy. 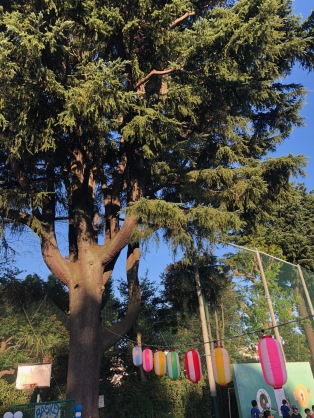