I thought I had done most of the shopping for the boys’ start of school by Saturday, and true, on Sunday there was only a couple of things outstanding. Then we labelled. That was a lot of fun.

But, the upshot is that we all now know how to write the boys’ names in katakana and their pants are named so I don’t have to be rooting around looking at what age is on the label. (A wee bugbear.)

Monday morning. The boys are excited. The randoseru, (backpacks) are packed. 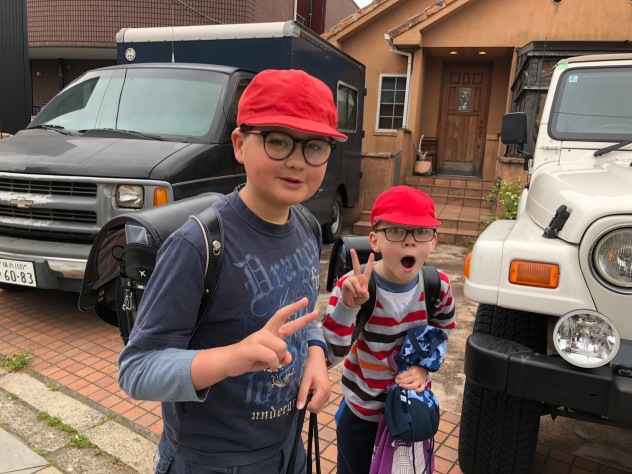 We are to be at the school at 8am to meet with Lin-sensei, the head of the international classroom. I think I’m going to refer to it as a unit though.

At Kenilworth school there were units – the deaf unit and the behavioural unit. (There weren’t any units at BSG and that made me sad. Because we all know that to be in the top 16% you cannot be deaf or have any emotional issues. Mmm.)
Dan didn’t make it past the genkan, (area where you doff your shoes), and was shooed away. It was all a bit of a blur. I had more forms to fill in and things to order.

The boys were made welcome by their classmates and teachers, who both seem nice. Oliver’s in particular is lovely. He is lucky because he has a girl in his class, Erica, who can speak English, (she’s Japanese though). I did spot a slightly European-looking kid in George’s class but George said that none of the kids spoke English. That mystery was solved today by me bumping into a tall Caucasian who introduced himself as the boy’s dad and he is Norwegian. So this Dad goes into school once a week to teach his son Norwegian. Cool.

I was in George’s classroom during the music lesson and they sang BINGO (in Nihongo) and I joined in in English which was great fun and earned me some kudos among the kids! I was hoping to be around at lunch time but I was dismissed by 10.30. Oliver is wanting me to stay but really, there’s not much I am doing of any worth.

So for some lessons they are in the unit, where they are getting intensive Japanese (Nihongo) support but otherwise they are in their classrooms. Oliver’s class has 36 kids, but the rooms seem big enough and I really don’t think it’s an issue.

I was told by George’s teacher that I need to make a mat for when they do art.

So I did that the Monday night. I also needed an empty 5kg rice bag for putting his flower pot in. So Dan sourced one of those from his colleagues and brought it back yesterday.

I also needed to go shopping yesterday for a yellow bandana for when Oliver does Home Ec (Friday), and a new, washable facemask. He will be able to take the apron made by the lovely folk in Montana, who belong to a Christian community,  (their name escapes me) which was gifted by Fiona.

The boys are enjoying their lunches. I have been told that George needs to adjust his grip when using a spoon. George went back for seconds on Monday. On Friday it will be George’s turn to be serving lunch to the others. Exciting.

Oliver said yesterday that he is loving school. George is having a whale of a time. Yesterday he was having his PE lesson and I sneaked this shot of them all listening to the teacher. Note the caps which are reversible – you get one red team and one white team.

It’s Friday! My lovely Egremont Bookclub gals will be meeting later. Boo. But I am creating another bookclub in Yokohama. Woot.

Yesterday we returned school  paperwork to the Naka Ward Office. It’s great. There’s a bit of waiting around, but the job is done there and then. Really efficient. Copeland could learn a lot. But then they’d need to employ more staff and there is no money……*sighs*. You get a number and two corresponding slips of paper and are eventually called to the desk. One slip of paper goes off into the office with the paperwork to be sorted and you keep the other to be reunited at the end of the job. So good. We then went to a Family mart and bought some picnic items including for me and George inarizushi, which is a pocket of tofu with sweetened rice inside. Oliver went for sausage and chips!

We ate these in a charming park near the Baystars’ stadium (the local baseball team). There were loads of tulips, they were so beautiful and dotted around the place were lots of artists practising their watercolours.

After this we learned about useful buses and bus stops and the limits of Google maps. But after a prolonged wait at the wrong bus-stop we found the right bus and headed to the Aeon department store to attempt the school shop.

I’ve been worrying about this for months. The list of items seemed scary and odd, but what Motomachi Primary school are asking for isn’t as huge as other lists I’ve seen and thankfully most of it was all on one floor. Unfortunately I ran out of cash before I finished the first shop. So we caught the bus home, had a wee rest, picked up more spondulics and headed back for another shot. Yesterday I bought:

Of course I am now taking their temperatures and it is interesting to see how much it fluctuates.

And on that note: I need to head out now to meet Dan’s colleagues for lunch. [Dan might be too busy to meet us(!)], then we are meeting a friend called Frances, from Taiwan, who is married to another of Dan’s colleagues; and tomorrow I am super excited to be meeting up with an old pal from Bournemouth. Yes!! So exciting. Very out of the blue. Cannot wait!!

This morning we need to go and buy a thermometer. Part of the paperwork that took NINETY minutes to complete yesterday, (with an interpreter), was writing down the kids’ average body temperature. Both the international teacher, Lin-sensai, and our interpreter, (a lovely lady from Dan’s HR department), were shocked that I didn’t know this off the top of my head. So today we buy a thermometer and start taking readings.

The orientation session yesterday was long. I need to set-up a bank account: in order to do this I need to create a seal. Woah. I need to take some paperwork over to Naka ward office today, and at some point we need to buy all the bits and bobs for Monday morning. It was a hard ninety minutes but I held it together until we got out. Really overwhelmed. And Oliver was being difficult.

As it happens, next week the teachers are carrying out home visits for all the pupils in the afternoons so the boys will only be going in for morning session and lunch.

I’ll be going in with them for that first week. Both the boys are upbeat and excited. Turns out Oliver will be going on a residential camp in June at a peninsular where they’ll be fishing and kayaking and suchlike.

So the photos. The school itself looks run-down in comparison to British primary schools. It reminds me of schooling from the 1960s. Or maybe earlier. But they WILL learn some Japanese! 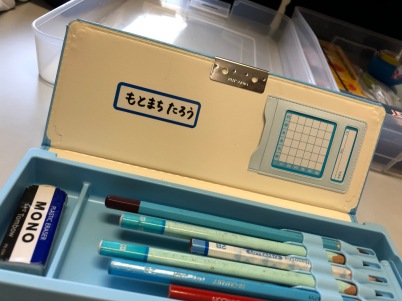 The pencil box. No smelly rubbers. Everything name labelled. In Katakana. 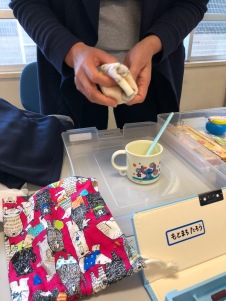 Cup, toothbrush and flannel in a bag. 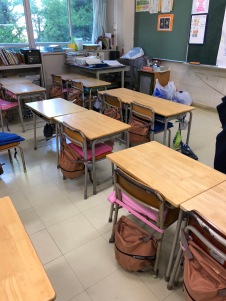 Cleaning cloth and peg under each desk.

Boys at the drinking station 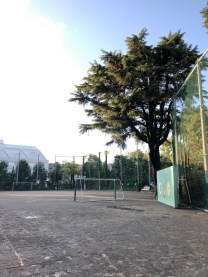 One of the playgrounds. There is also an outdoor pool in the grounds.

Yesterday morning we landed in Japan at Haneda airport in south Tokyo. At immigration we received our residents’ cards and we took our fifteen bags to the coach stop and caught a limousine coach into Yokohama. The boys were knackered, (despite my best efforts they did NOT sleep on the plane), and G zonked our right away. Twenty five minutes later we unload the coach and pile into two taxis to get to our house. Yes house! The sun is shining, the weather is warm and the taxi driver checks with me before putting on the air con. 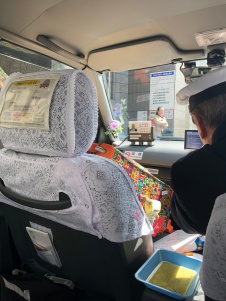 We dumped the bags and walked through Chinatown to get to the Naka ward office where we spent a couple of hours minding a sparked-out George whilst applying for our Health Insurance cards, school places and family allowance. (I know!) We had lunch in some small Chinese place and then walked home. The Sakura (cherry blossom) has pretty much gone now here, but we did see some floating down the local river.

We live at the top of a hill. Outside our house is a flight of steps down to a shopping area which has loads of cafes, salons, grocers and even a shop specialising in honey. At the top of the hill is an historical house called ‘Home of a Diplomat’ which has sumptuous gardens that are free to explore. 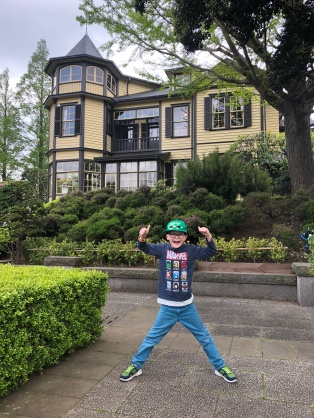 Today we caught the train into Yokohama central (two stops on the Negishi line) and bought some boxes for storing clothes in and other essentials. There was a craft market happening by the quayside which we looked around. The quality varied. I did buy some earrings from a lovely lady who spoke English and made things from sea glass.

We had lunch in a British pub. I felt really quite pissed after my pint. Then this afternoon we finished unpacking and braved the drizzle to explore the area at the top of the hill. Mainly the boys’ school. Well, it’s huge and modern and it’s a lovely 10 minute walk through Yamate gardens.

From here, once you descend the hill again there are even more lovely bakeries, cafes, flower shops and boutiques to explore.

Tonight we had Dan’s spag bol and I had my first Japanese bath. You shower first, then soak. It was heavenly.

Tomorrow we are thinking of going to Kamakura on the train.

I am so happy to be here. It’s quite the antidote to all the mini-catastrophes at home.